Lessons from Dallas Cowboy’s Running Back and His $2 Car

I was intrigued by a story I saw recently about the Dallas Cowboy’s running back, Alfred Morris, who signed a $3.5 million deal on top of more than $3 million he made playing for the 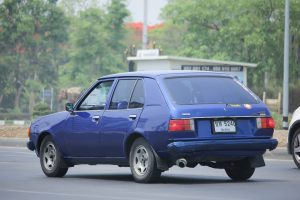 Washington Redskins, and yet he still drives a 1991 Mazda 626 he bought from his pastor for $2 when he was a junior in college. He calls the car “Bentley,” and says he is determined to keep the car and refrain from a “flashy” lifestyle. Do you think that keeping a car “until death do us part” is something everyone should do?

As a matter of fact – YES – I do believe that a good way for people to maximize their resources is to buy large ticket items such as cars with the goal of buying them outright or with minimal payments, paying them off quickly and working to keep them running for as long as possible. Alfred Morris has shown incredible restraint and real wisdom in keeping his beloved car running. But there is more to his accomplishment than cheap transportation.

I will write more about car ownership in a minute, but first, let’s consider just what the true cost of Morris’ “Bentley” has meant to his bottom line, compared to the luxury Bentley he could have purchased with the more than $6 million he could be spending.

To understand the true value of keeping his old car running, you need to know more about “opportunity costs.” An opportunity cost is the cost to you of an alternative choice you could have made. With every dollar you have, you choose to save, to spend, or to tithe, and each choice yields its own rewards. But with each choice some doors are closed. To determine the real cost of a choice you need to consider what would have happened if you had opened a different door.

In Morris’ case with the car, his decision to keep $300,000 in the bank and in his pocket, rather than spending it on a new Bentley, has tremendous, long-term potential. At age 22, about the time his career was taking off, if Morris put the $300,000 for a car into a Real Estate investment or the stock market (both of which can yield 8 to 10 percent annually with long term investment), he could earn more than $8.2 million by age 65.

That means the opportunity cost for Morris was NOT $300,000 for a one-time car purchase, but actually more than $8.2 million in resources if that same amount had been invested for the future.

Reading this article reminded me of a commercial I saw once that showed people living the high life, wearing expensive clothes and jewels, and traveling the world on a yacht. The voice over for the commercial noted that these people seemed to have it all, but then it flashed forward to the future when they were old and destitute, and the announcer observed that their lifestyle was at the tremendous cost of their retirement needs. Even though the advertisement was for a financial planning service, thinking about the future is an important spiritual principle for decision-making.

In Luke 14:28-30, Jesus was telling his followers to consider the cost of following him, and to make a plan to see it through to the end. He said: “Suppose one of you wants to build a tower. Won’t you first sit down and estimate the cost to see if you have enough money to complete it? For if you lay the foundation and are not able to finish it, everyone who sees it will ridicule you, saying, ‘This person began to build and wasn’t able to finish.’”

We all need to live our lives in such a way that we can meet our obligations as well as stand before God himself and give an account for our choices. To fully consider the costs of our daily choices, we need to remember that eternity stretches before us, where our choices have eternal implications. This means we need to make sure our priorities for spending are bigger than just our desires.

In Matthew 6:19-21, Jesus said: “Do not store up for yourselves treasures on earth, where moths and vermin destroy, and where thieves break in and steal. But store up for yourselves treasures in heaven, where moths and vermin do not destroy, and where thieves do not break in and steal. For where your treasure is, there your heart will be also.”

Even on something as seemingly simple as a car buying choice, it’s important to first count the financial cost, considering whether you will have the income to pay for it and what you will be giving up to have that car. Crown has some great, free tools for thinking through a car purchase which you can access here.

For most of us, a car is not a luxury item but a necessity for getting to work and to all the locations that make up our daily lives. It’s important, especially if public transportation is not an option, to have a reliable way to get to work and everywhere else your life determines, but needs vary.

A father with daughters may decide he would rather acquire a new car, to ensure that it is safe to drive late at night, while someone else may choose a fixer-upper because he or she has the skills to keep it going.

Still we must also count the spiritual cost, asking ourselves what our motivation is for this purchase. I would also encourage you to take a free MoneyLife Indicator assessment to better understand your attitudes toward money and how you use it, and to compare that with what God recommends in scripture.

It is possible that a desire for a certain kind of car is more about trying to impress other people rather than trying to do what is best for you. There is not one right car choice for everyone, but for every decision, there is a cost. So, before you get a car (or make any other big purchase), be sure you know what the full cost is – today AND tomorrow.