Your earnings in the first decade of your career established the probability of high or low lifetime earnings. This is fascinating…

Economists at the Federal Reserve Bank of New York said in a report published in February 2015 that your earnings the first decade of your career are the lead indicator for what you will earn for the rest of your life. 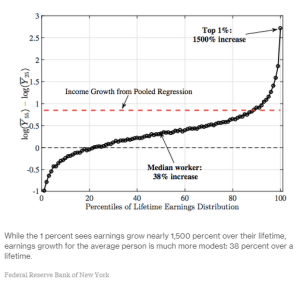 That may seem obvious—those at the top of the wealth differential were probably propelled there by astronomical earnings growth. But not so fast. The Fed report points out that the steepest pay increases happen early. Across the board, the bulk of earnings growth happens during the first decade of your career. Stay with me…

Workers whose lifetime earnings sit at the median can expect to see their earnings stagnate from ages 35 to 55. In fact, only the wealthiest 2 percent will see earnings grow after age 45. The projections suggest that the time to hustle is when you are young, because you’ll probably see your last big raise well before you celebrate your 40th birthday. They also suggest that if your goal is to have high lifetime earnings, you will need to consider starting your own business so that you control your wages, not someone else. But to the point of the Federal Reserve study, even then, it is better to start early.